Risk assessment, prevention and surveillance of pregnancies at risk of fetal growth restriction

(Based on Element 2 of the Saving Babies’ Lives Versions Two, Care Bundle for Reducing Perinatal Mortality)

There is strong evidence to suggest that Fetal growth restriction (FGR) is the biggest risk factor for stillbirth. Therefore antenatal detection of growth restricted babies is vital and has been shown to reduce stillbirth significantly because it gives the option to consider timely delivery of the baby at risk.

All staff looking after pregnant women must be aware however that

are distinct entities.  Although SGA babies are at increased risk of FGR compared to appropriately grown fetuses, fetuses <3rd centile are far more likely to be FGR than fetuses between the 3rd and 10th centile. This guideline aims to identify and focus on the higher risk FGR group whilst trying to limit unnecessary intervention in the lower risk SGA group.

Risk assessment, surveillance and management of the FGR fetus

Definition of FGR in a previous pregnancy as a risk factor: defined as any of the following:

Definition of FGR in a current pregnancy

Appendix 1 - NHS GG&C Guideline; Aspirin – Antenatal use of aspirin for the prevention of pre-eclampsia 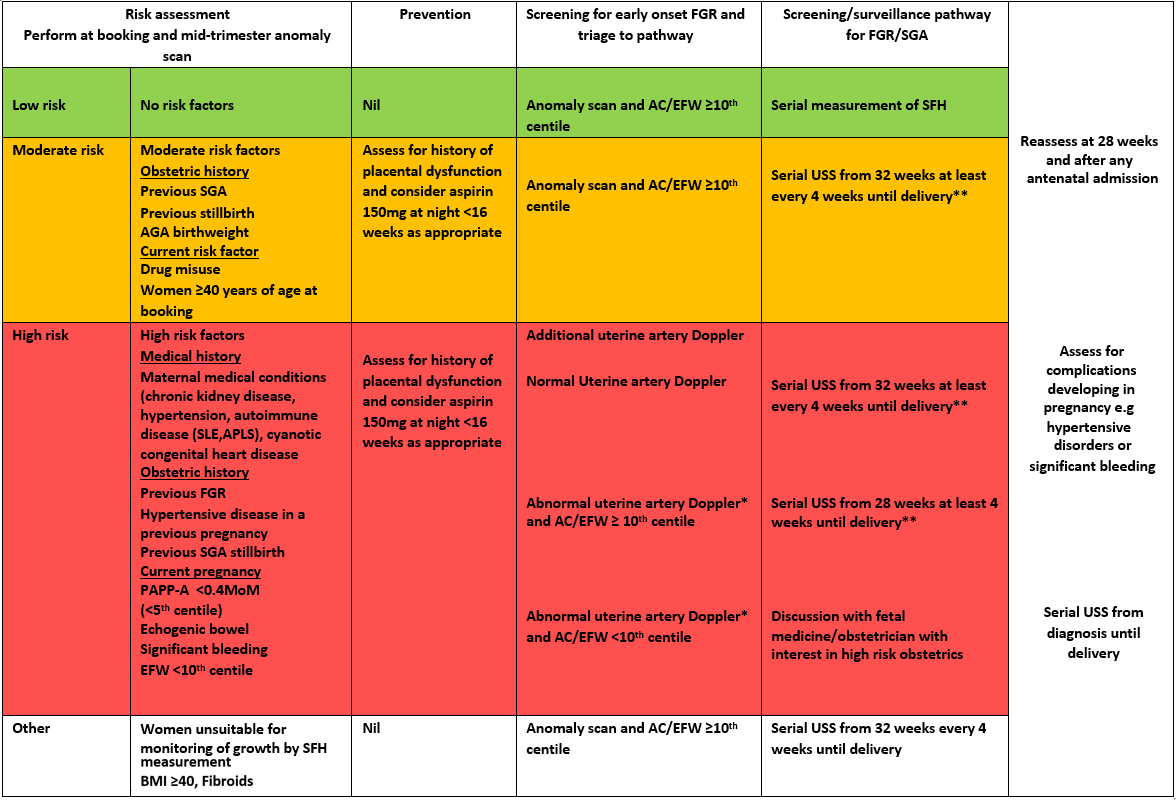 **Other risk factors and risk assessment may necessitate shorter intervals between growth scans.

***Intergrowth charts for EFW begin at 22 weeks. AC used before then.

Early onset FGR is rare (0.5%). The vast majority are associated with abnormal uterine artery Doppler indices or already present EFW <10th centile in the early third trimester. Thus, uterine artery Doppler can be used in the second trimester (20-24 weeks at routine FAS) to further determine the risk of placental dysfunction and risk of hypertensive disorders and/or early onset FGR for women at high risk.

The risk factors listed here constitute those routinely assessed at booking. Other risk factors exist and risk assessment must be individualised taking into account previous medical and obstetric history and current pregnancy history. For women with maternal medical conditions and individuals with disease progression or institution of medical therapies may increase an individual’s risk and necessitate monitoring with serial scanning. For women with a previous stillbirth, management must be tailored to the previous history