Factor Xa inhibitors Apixaban (Eliquis®), Edoxaban (Lixiana®) and Rivaroxiban (Xarelto®) are the preferred anticoagulant therapy for treatment of venous thromboembolism and non-valvular atrial fibrillation (AF). Within NHS GG&C, edoxaban is the treatment of choice for AF and Apixaban for pulmonary embolism. They are direct oral anticoagulants (DOACs) and are Factor Xa inhibitors. An additional DOAC, dabigatran (a direct thrombin inhibitor), is also in use within NHS GG&C in a small number of patients.

DOACs are in tablet form and are taken orally once (rivaroxaban, edoxaban) or, twice (apixaban, dabigatran) daily. Rivaroxaban may also be taken twice daily in the first 21 days as a loading dose. They have a relatively short half life (of 8-12 hours) but this may be longer in the presence of renal impairment (creatinine clearance, (CrCl) <30ml/min). The CrCl is the preferred measure of renal function (rather than eGFR) when managing DOACs (see Appendix A for the NHS GG&C creatinine clearance calculator). With the exception of dabigatran (for which there is an antidote, Praxbind® (idarucizumab)) the anticoagulant effect of DOACs cannot be easily reversed and as such emergency surgery or procedures may be challenging to manage.

This guideline will discuss the management of patients taking anticoagulants (warfarin or DOACs) and anti-platelet agents (e.g. clopidogrel) when undergoing elective gynaecological procedures, according to their risk of haemorrhage.

Invasive gynaecological procedures with a low risk of bleeding are listed below:

DOACs do not need to be withheld for minor gynaecological procedures at low risk of bleeding. However, consideration should be given to this risk of bleeding and if there is clinical concern, then withholding the DOAC for 24 hours prior to the procedure may be appropriate.

If there is significant renal impairment (CrCl <30ml/min), omit DOAC >48 hrs prior to procedure (see Appendix A for the creatinine clearance calculator). If there is concern about renal function, in certain circumstances withholding the DOAC for 72 hours may be considered following discussion with Haematology.

Checking the coagulation screen is not always necessary as it is a poor indicator of any residual anticoagulant effect for DOACs, other than dabigatran. Checking the anti Xa may also be considered. For minor invasive gynaecological procedures however, checking these blood measures is not required routinely.

Clopidogrel does not need to be withheld for gynaecological procedures at low risk of bleeding.

Aspirin does not need to be withheld for gynaecological procedures at low risk of bleeding.

Warfarin does not need to be withheld for gynaecological procedures at low risk of bleeding. However, INR should be assessed within 72h before the procedure to ensure the patient is not over-anti-coagulated.

Invasive gynaecological procedures with a moderate risk of bleeding are listed below:

Discussion with Haematology and Cardiology may be required. The risk of thrombosis should be established (see Appendix B and NHS GG&C guidance).

Local anaesthetic using a vasoconstrictor should be considered if appropriate.

*These procedures may require discussion with Haematology in an acute emergency setting.

The procedure should be delayed until ≥48 hours after the last dose of DOAC depending on the risk of bleeding. If the creatinine clearance is <30ml/min, then the DOAC should be withheld for ≥72 hours. If there are concerns about bleeding or renal impairment pre-operatively then obtaining an anti-xa level +/- coagulation screen (ensuring AP <13 seconds(s) and APTT <38s) may be indicated.

This is summarised in Figure 1. 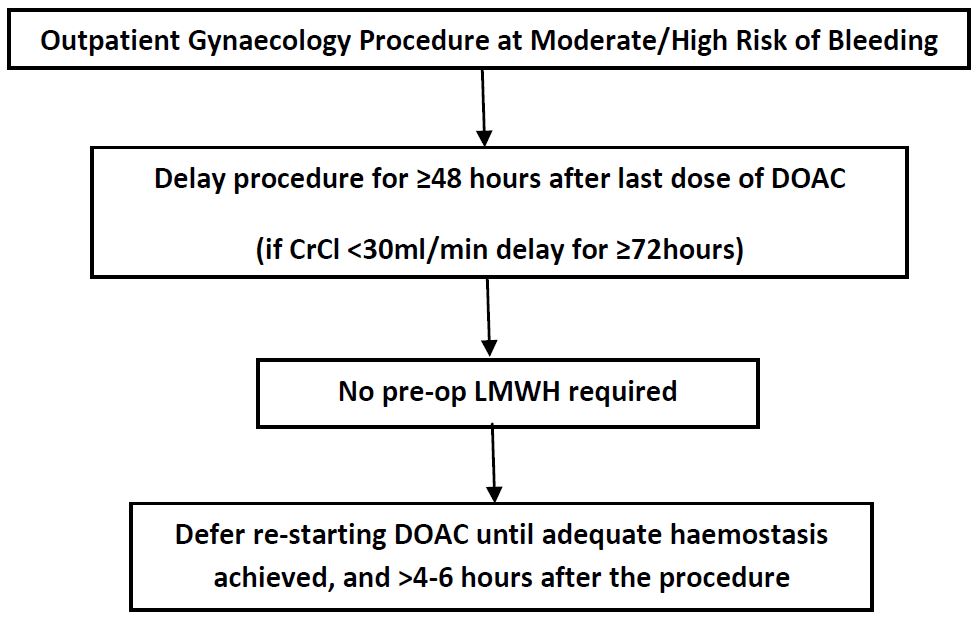 Stop clopidogrel 7 days before any invasive gynaecological procedure at moderate/high risk of bleeding. Aspirin may be used in place of clopidogrel during these 7 days if indicated.

This may require discussion with Cardiology and risk of thrombosis assessed (see Appendix B and NHS GG&C guidance).

Re-start clopidogrel 48 hours after the procedure.

Aspirin does not need to be withheld before any invasive outpatient gynaecological procedure at moderate/high risk of bleeding. Patients should be informed however of the greater risk of bleeding +/- haematoma formation.

Stop warfarin 5 days before any invasive gynaecological procedure at moderate risk of bleeding. The target INR should be ≤1.4 for the procedure. LMWH should be given on each day pre-operatively and the dose dependent on the thrombosis risk (see Appendix B and NHS GG&C guidance).

Postoperative LMWH and anti-embolic stockings should also be given. Again, the dose will depend on the risk of thrombosis (see Appendix B and NHS GG&C guidance). The original dose of warfarin therapy may be commenced from day 1 post-operatively as it would typically take 48-72 hours to have an effect.

Vitamin K 5mg IV may be given to reverse anticoagulation effect of warfarin if INR is >1.5 on day before procedure.

The risk of thrombosis should be established (see Appendix B and NHS GG&C guidance).

Local anaesthetic using a vasoconstrictor should be considered if appropriate.

Vitamin K 5mg IV may be given to reverse anticoagulation effect of warfarin, but will take 6-24 hours for an effect. For immediate reversal of warfarin anticoagulation, an infusion of Beriplex will be required.

The target INR should be ≤1.4 for the procedure.

B) Risk of thrombosis according to medical condition