Maternal perception of fetal movement is one of the first signs of fetal life and is regarded as a manifestation of fetal wellbeing. Fetal movements have been defined as any discrete kick, flutter, swish or roll. A significant reduction or sudden alteration in fetal movement is a potentially important clinical sign. It has been suggested that reduced or absent fetal movements may be a warning sign of impending fetal death. Studies of fetal physiology using ultrasound have demonstrated an association between RFM and poor perinatal outcome.

Clinicians should be aware (and should advise women) that although fetal movements tend to plateau at 32 weeks gestation, there is no reduction in the frequency of movements in the late third trimester.

Factors which increase the risk of stillbirth

Factors which increase the risk of stillbirth are: 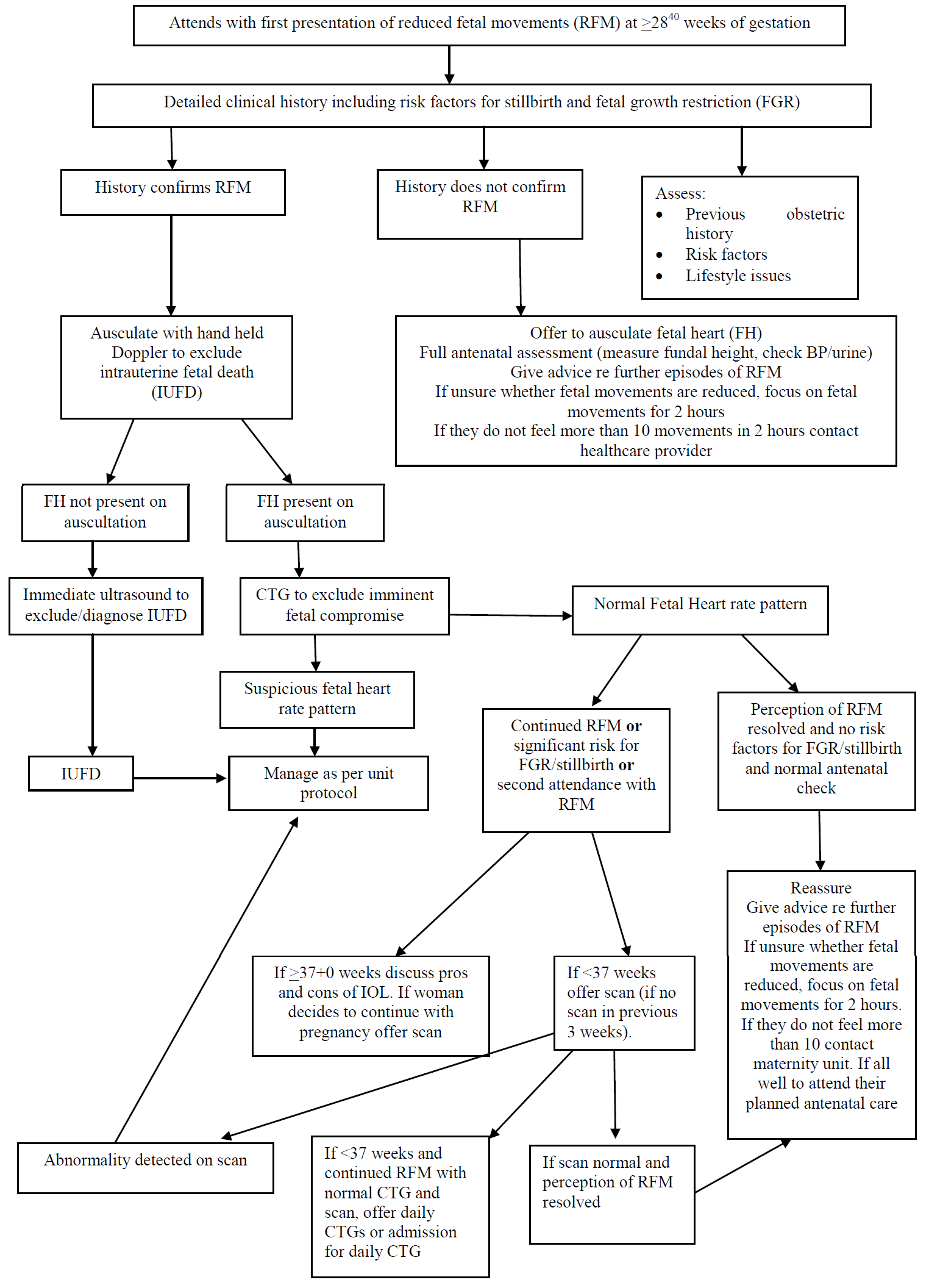 Women who have normal clinical assessment and investigations after first episode of RFM should be advised to contact the maternity unit if they have a further episode.

Women who have normal clinical assessment and investigations after second (or more) episode of RFM should undergo a scan (including umbilical artery Doppler) for fetal well being (unless they have had a normal scan within 3 weeks). At the third presentation, the woman should be referred to the consultant-led antenatal clinic for consideration of increased fetal surveillance.

Those women who are still not feeling fetal movements after having a normal scan and CTG should be offered either daily CTGs as an outpatient or admission and twice daily CTGs until movements return.

Women who present on two or more occasions with RFM are at increased risk of a poor perinatal outcome. There are no studies to determine whether intervention (e.g. delivery or further investigation) alters perinatal morbidity or mortality.  The decision whether or not to induce labour at term in a woman who presents recurrently with RFM when the growth, liquor volume and CTG appear normal must be made after careful consultantled counselling of the pros and cons of induction on an individualized basis (RCOG Green Top Guideline No. 57)

If a woman presents with RFM between 24+0 and 27+6 weeks of gestation, the presence of a fetal heartbeat should be confirmed by auscultation with a Doppler handheld device.

The fetal heartbeat should be confirmed to check fetal viability. History must include a comprehensive stillbirth risk evaluation, including a review of the presence of other risk factors associated with an increased risk of stillbirth. Clinicians should be aware that placental insufficiency may present at this gestation. A complete antenatal assessment including measurement of fundal height, BP and urine should be carried out. If there is clinical suspicion of FGR, or raised BP/proteinuria consideration should be given to the need for ultrasound assessment. There is no evidence on which to recommend the routine use of ultrasound assessment in this group.

RFM if under 24 weeks gestation

If a woman presents with RFM before 24+0 weeks of gestation, the presence of a fetal heartbeat should be confirmed by auscultation with a Doppler handheld device.

A full antenatal check-up must also be completed including measurement of fundal  height, BP and urine.

If fetal movements have never been felt before 24 weeks, a referral should be made to a medical sonographer to exclude any neuromuscular conditions.