The goal of Intrapartum fetal monitoring is to detect and prevent the ill-effects of fetal hypoxia. There are currently two methods of monitoring fetal wellbeing in labour:

The method adopted is dependent on risk assessment and maternal choice. Women should be given evidence-based advice about fetal monitoring antenatally and should be involved in the decision making process (NHS Litigation Authority 2004).

Clinical practice guidelines only recommend continuous CTG for high-risk women (NICE 2014) and current evidence does not support the use of the admission CTG in low risk pregnancy (RCM 2012). Therefore, intermittent auscultation of the FH should be offered to low-risk women in established labour in all birth settings (NICE 2014).

Procedure for Intermittent Auscultation in labour

Intermittent auscultation involves listening to the fetal heartbeat periodically and recording a single measure of the fetal heart rate at a time (Martis et al. 2010).

Both intermittent auscultation and continuous CTG provide information on the baseline heart rate (usually between 110 and 160 beats per minute in the term fetus), accelerations (transient increases in the FHR) and
decelerations (transient decreases in the FHR). It is known that some aspects of labour will cause natural alterations in FHR patterns. Some of these changes are subtle and can only be detected by continuous CTG, e.g. baseline variability, temporal shape of decelerations.

Take the following into account when assessing baseline FH rate:

Be aware that risk factors can change at any point during labour and may necessitate the move to continuous CTG (RCM 2012). According to NICE (2014) indications for continuous CTG include:

Women at low risk of complications who have CTG commenced because of concern arising from intermittent auscultation should have the cardiotocograph removed if the trace is normal for 20 minutes, unless the woman asks to stay on continuous cardiotocography (NICE 2017).

It is currently recommended that the Pinard should be used in the first instance to determine that there are fetal heart sounds before intermittent auscultation is carried out using a dopplar. Contemporaneous documentation is essential as there is no print out containing a record of the fetal heart rate. 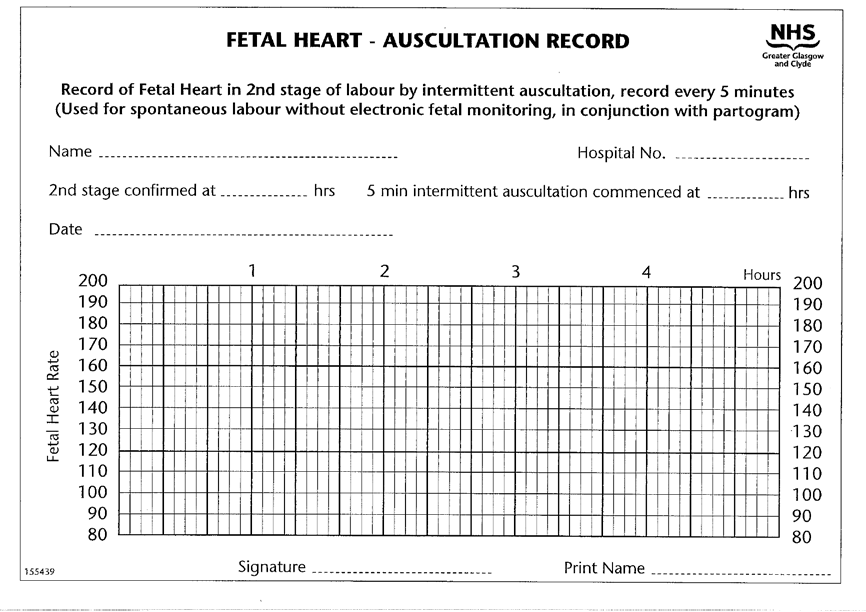