Panic will not help!

Call for help so that it is on the way.

This may be necessary to deliver:

Documentation will inevitably be retrospective and must be clear.

The operator’s hand and forearm may need to be in uterus / lower genital tract.

A fetal foot is identified by recognizing a heel through intact membranes. The foot is grasped and pulled gently and continuously lower into the birth canal (or through uterotomy at CS). The membranes are ruptured as late as possible. The baby is then delivered as an assisted breech or breech extraction with pelvi-femoral traction, Lovset’s manoeuvre to the shoulders if required and a controlled delivery of the head. This procedure is easiest when the transverse lie is with the back superior or posterior. If the back is inferior or if the limbs are not immediately palpable, do not panic, follow the curve of the back and down and round to find the leg. Confirm you have a foot before applying traction. This will minimise the risk of the unwelcome experience of bringing down a fetal hand and arm in the mistaken belief that it is a foot.

If ultrasound is immediately available to an experienced sonographer this may help identify where the limbs are.

A few seconds of calm consideration and accurate assessment will almost certainly result in an effective delivery manoeuvre. 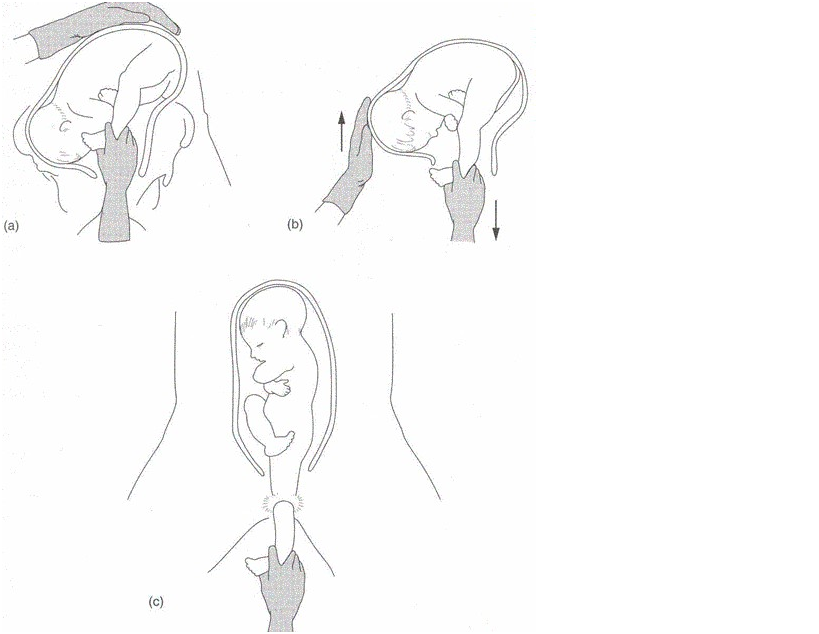 It is typically associated with preterm vaginal breech delivery when the fetal buttocks and trunk pass through an incompletely dilated cervix. The uterus subsequently contracts and clamps tightly around the fetal head.

N.B Entrapment can also occur at Caesarean section and although the reasons may be different the obstetrician needs to have a strategy (see Delivery of Breech at LUSCS)

Management of Entrapment at Vaginal Delivery

Nitrolingual pump spray should be primed before using it by pressing the nozzle once.

1 – 2 sprays (400-800 micrograms) administered as spray droplets beneath the tongue (do not inhale). Ask woman to close her mouth after spray is administered.

Repeat after 5 minutes if hypertonus is sustained.

Haemodynamic monitoring, a rapidly running I.V. infusion and immediately available ephedrine and phenylephidrine are mandatory prior to the use of Nitroglycerin (Glyceryl Trinitrate)

Once the third stage is complete, a Syntocinon infusion should be commenced.